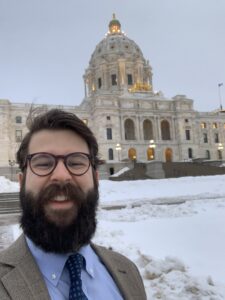 On Tuesday, Jan. 3, the Minnesota legislature convened for what will surely be a consequential session. Legislators will be tasked with setting the state’s next biannual budget. Beyond that, incoming DFL majorities will be eager to deliver on promises they made to voters during the election and throughout years of divided government. As always, the MFU team is working hard to prepare for session, meet with partners, and—importantly—connect with key legislative leaders about our top priorities.

To recap, the DFL won a trifecta in the November election, flipping the state Senate and retaining control of the state House, the governorship, and all constitutional offices.

On Monday, Jan. 2, Gov. Tim Walz, Lt. Gov. Flanagan, and constitutional officers were sworn into office during an inauguration ceremony. Walz spoke about his priorities for the upcoming session, leading with his plans to make Minnesota a better state for kids, including by making the “largest investment in public education in this state’s history,” investing in paid family leave, and helping end child homelessness and poverty.

With the start of session, legislators are gathering in St. Paul and starting to organize introductory hearings on agency work and key legislative issues. You can find an updated calendar here.

Here’s more of what we know about the upcoming session:

Leadership– soon after the November election, members of the Senate and House met to elect leadership:

Fortunate for MFU, leaders in both houses have a proven track record of working on agriculture issues.

Speaker Melissa Hortman who is returning to her post was just elected to her 10th term and has led her caucus through three consecutive budget cycles. In each, her leadership was required on agriculture issues, including last session to secure quick action on emergency funding to address the avian flu and to approve drought relief. In 2019, she personally championed the Dairy Assistance, Investment, and Relief Initiative (DAIRI) which provided grants to dairy farmers who enrolled in the USDA FSA’s Dairy Margin Coverage Program. This work earned her the legislator of the year award from the Minnesota Milk Producers and is still benefiting Minnesota producers as our state boasts some of the highest DMC enrollment in the nation.

In the Senate, Leader Dziedzic recently served as the minority lead for DFLers on the Senate Agriculture Committee and on the tax committee where she took the opportunity to dig in on issues important to MFU. When she spoke to delegates at MFU’s annual convention last month, she shared more about her family’s history of dairy farming in Rosemount.

In the minority, MFU has found opportunities to work with Leader Mark Johnson on agriculture issues relating to his district. And while our experience with Leader Lisa Demuth isn’t as extensive, her Deputy Minority Leader is Rep. Paul Torkelson who’s worked with MFU on a host of issues, including leading on efforts to provide a property tax exemption for agricultural land held in riparian buffers.

Committee Assignments– in addition to leadership, we also now know committee assignments in the Senate and House:

Of course—and as with every session—we’ll work to maintain a strong presence across committees related to healthcare, the environment, transportation, and the rest of MFU’s priorities. You can find an updated schedule of committee hearings here throughout session.

Last session, legislators kicked off the year with a record $9.2 billion surplus estimated surplus and ended last session with upwards of $7 billion yet unspent.  This estimated surplus builds on those unspent funds and reflects economic growth that leads to greater revenue from income and sales taxes. Minnesota, for example, boasts the lowest unemployment rate in the nation.

For context, Minnesota’s entire state budget for the 2022 and 2023 is approximately $53.3 billion. This is an incredible opportunity for incoming majorities. However, as always, requests are quickly outpacing available funds. Just for example, eliminating the tax on high-income earners’ Social Security benefits, for example, would cost upwards of $1 billion over the biennium. So-called ‘Walz checks’ of $2,000 per couple would cost $4 billion, just increasing the education formula by 2 percent would cost nearly $400 million, and so on. You can see how it adds up!

On the other end of that spectrum, the state’s budget for agriculture amounts to less than one half of one percent of the state’s overall budget.

Governor’s Budget Request– a first big step in setting the budget for the upcoming biennium is the governor’s constitutionally required budget request that will be formally unveiled on or before Jan. 24. Last session, with a $9.2 billion surplus in a non-budget year, Walz proposed a $65 million in agriculture spending including:

Along with strong support for animal disease preparedness, farmers markets, farm business management, cooperative development grants, and a host of other MFU priorities. Even beyond that, they proposed:

Ultimately, an approximately $15 million agriculture budget did pass, but much of what the governor proposed was left on the table.

Leading up to session, we’ve been in close touch with agencies and the governor’s office as they craft this budget, understanding that it will set the tone for budget conversations.  In particular—and in line with our Special Orders of Business—we’ve asked the governor to prioritize making healthcare more affordable through a MNCare Buy-in, building on antitrust enforcement at the Attorney General’s Office, and investing in farmers through a strong agriculture budget that renews their commitment to initiatives proposed last year.

New Commissioners– as one of his first actions upon reelection, Walz appointed 6 new members to his cabinet, including:

In particular, MFU has a strong working relationship with now Commissioner Paul Marquart who just retired from the Minnesota House after 18 years. Most recently, he served as chair of the powerful Tax Committee where he championed the Ag to School Tax Credit, expanding the Beginning Farmer Tax Credit, and other priorities for MFU.

At convention, MFU Executive Committee member Josh VanDerPol moved to add opposition to the proposed merger between Sanford and Fairview Health. In addition to quickly sending a letter to the Attorney General’s Office, President Gary Wertish joined leaders of healthcare unions in penning an editorial that was published in the Star Tribune.

“As leaders of the state’s two largest health care unions and president of the Minnesota Farmers Union, we believe strongly in our state’s long history of charitable, nonprofit hospitals that are meant to put the health of Minnesotans ahead of health care profits,” they said in their editorial. “It is because we believe in this mission so strongly that we are unified in our opposition to the proposed merger of Sanford Health and M Health Fairview.”

In his formal letter to the Attorney General, Wertish laid out more details about our opposition, pointing out that:

Attorney General Keith Ellison’s collecting feedback about the merger and is hosting events around the state to hear directly from Minnesotans. Please do join for these listening sessions as you’re able!